Just when we think we’ve hit bottom for listing inventory, another week passes by with even fewer homes for sale In 1959, a new television show premiered on CBS called The Twilight Zone. The title of the first episode was “Where is Everybody?” After the famous opening, the narrator begins “The place is here, the […] 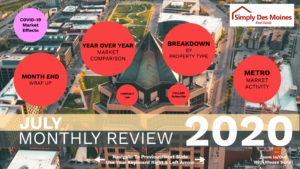 There is a phenomenon happening in the Des Moines Real Estate Market – We are experiencing an Inversion So just what does this mean? In late May of this year, the number of homes for sale dipped below the number of homes in sale pending status. Not only did that dip occur, it has continued […] 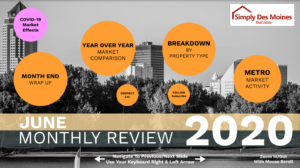 Des Moines Home Values Appreciated During Covid-19 With new record low home mortgage interest rates, homebuyers are able to spend more on their home purchases in 2020. The ongoing question this spring from homeowners contemplating listing their homes is whether their homes are worth more this spring than a year ago. The short answer is […]

What Else Could Happen? The Ups and Downs (and Ups) of Des Moines Real Estate For the first 11 weeks of 2020, everything was looking fantastic for Des Moines residential real estate. A mild winter and warm weather were all that it seemed to take to signal homebuyers and sellers to start their engines. The […] 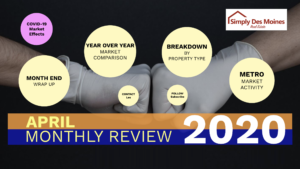 Pivot – “To turn as if on a point” After the 2008 economic recession, I began to talk about the “new normal” and how the real estate business would continue on, just in a different way. Since the coronavirus has taken over the world, I’ve been hearing talk about the new normal again. This time […] 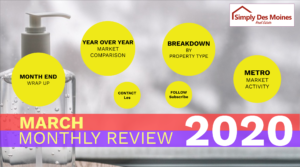 A March like no other on record. There are few times in life that a turning point is as poignant as the one we are currently experiencing. What had been a swift start to 2020 with a strong economy and positive job growth, low unemployment and a healthy (unhealthy?) dose of politics has turned into […] 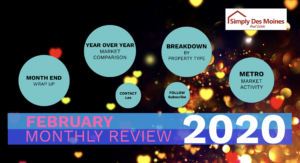 Homes for sale counts started off with a brief rise but the buyers started coming out from their winter rest and bought up homes at a quick pace leaving inventory levels close to 3,400. This is evident by the steady rise in sale pendings during the month. With an average days on market in February […]

This January was a much better weather month than a year ago. Where it is really noticeable is the Pending Sale count. As of January 31st, we had 989 homes in Pending status compared to only 856. Homes for sale count was 3,526 homes for sale (dropping quickly to below 3,500) and the median list […]

Warm December Keeps Buyers, Sellers and Realtors Busy Closed sales for 2019 missed 2018 numbers by less than 1/2 of a percent as December 31st arrived but it could have been much farther away if it weren’t due to an active real estate market and an unusually warm December. Two categories, Single Family Resale homes […] 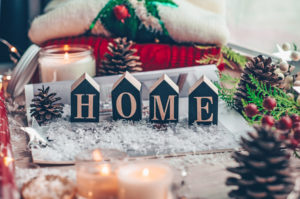