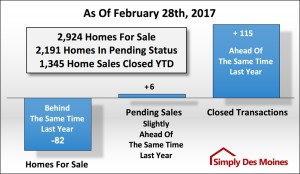 Behind – Even – Ahead It is the end of February, a month that is typically known for winter blizzards, sub zero temperatures and families staying inside. February 2017 was virtually none of those things. Multiple high temperature records were set and it clearly felt like it was late March most of the month. As […]

The National Association of Realtors (NAR) keeps historical data on many aspects of homeownership. One of the data points that has changed dramatically is the median tenure of a family in a home. As the graph below shows, for over twenty years (1985-2008), the median tenure averaged exactly six years. However, since 2008, that average is almost […]

Today, many real estate conversations center on housing prices and where they may be headed. That is why we like the Home Price Expectation Survey. Every quarter, Pulsenomics surveys a nationwide panel of over one hundred economists, real estate experts, and investment & market strategists about where they believe prices are headed over the next […]

This report is posted by the 15th of each month for the previous months transaction activity. January 2017 Community Market Recap

Highlights: Sales of existing homes reached the highest pace in a decade at a seasonally adjusted annual rate of 5.69 million. January marked the 59th consecutive month of year-over-year price gains as the median home price rose 7.1% to $228,900. NAR’s Chief Economist, Lawrence Yun had this to say, “Much of the country saw robust […]

The National Association of Realtors recently released a study titled ‘Social Benefits of Homeownership and Stable Housing.’ The study confirmed a long-standing belief of most Americans: “Owning a home embodies the promise of individual autonomy and is the aspiration of most American households. Homeownership allows households to accumulate wealth and social status, and is the […]

According to a survey conducted by Bankrate.com, one in four Americans are considering buying a home this year. If this statistic proves to be true, that means that 59 million people will be looking to enter the housing market in 2017. The survey also revealed 3 key takeaways: Those most likely to buy are ‘Older […]

So, you’ve decided to sell your house. You’ve hired a real estate professional to help you with the entire process, and they have asked you what level of access you want to provide to potential buyers. There are four elements to a quality listing. At the top of the list is Access, followed by Condition, […]

According to the Beracha, Hardin & Johnson Buy vs. Rent (BH&J) Index, the U.S. housing market has continued to move deeper into buy territory, supporting the belief that housing markets across the country remain a sound investment. The BH&J Index is a quarterly report that attempts to answer the question: In today’s housing market, is it better […]

When I am out showing homes to buyers, some of the most common questions I hear is “How is the neighborhood?”, “Is this a safe neighborhood?”, “What are the crime rates for this area?” and “Can I feel safe walking this neighborhood with my children?”. These are legitimate questions of any potential home buyer as […]